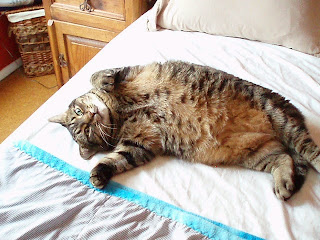 Addy has made some progress since my last entry. Her hiding under the bed has become a little less frequent and she's spending a great deal more time at the windows since we've now been able to open them. She is a huge avid bird and squirrel watcher and I'm convinced that she'd be leaving little carcasses at our door if only she could get out to pounce. There's no mistaking that huntress look!

I tried another brush I have for doing her coat - this one is made entirely of rubber. She seems to enjoy it more and as long as I don't wave it in front of her face, she doesn't seem to be overly bothered. She likes the mini massage it gives her and appears more relaxed - which is good since the last thing I would want to be doing would be to having her feel threatened with what is supposed to be such an enjoyable experience.

She's also venturing downstairs abit more. She stays for longer and longer but still prefers the safety and security that she feels the upstairs offers her. There was a weird incident on Saturday however. Hubby had been out and came home around midday. She had been in the livingroom with the boys and I, enjoying the sun pouring through the front window, when all of a sudden she got up, bolted for the stairs, and ended up on the landing, actually growling at the front door. Steve hadn't even gotten out of the car or come near the house, but she stood there growling. I've never seen a cat do that, and we both agree that she's obviously been seriously mistreated by someone to have such a reaction to the sound of a car pulling in. 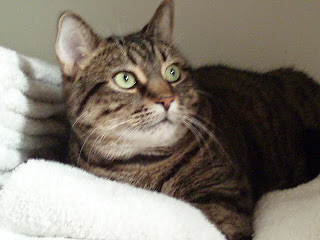 Progress is slow but it's there and that's all that really counts.
Posted by Safe Haven Hotel at 8:19 AM