I'm so happy to write that it appears our force feeding days are behind us with Caramel. She had abit of wet food on her own yesterday, quite a number of Temptation treats (I know, I know, not the greatest thing to be feeding), and although I was discouraged when I got up this morning and it was quite evident that she hadn't touched anything overnight; when I went back in 2 hrs later, oh yes! - more wet had been eaten!!

She is still quite congested with runny eyes but I think the worst of it is now over and she was grooming herself and engaged in abit of play with me while we spent time together, all very encouraging signs. Can I just say that I HATE it when one of my kids won't eat - foster or otherwise. I find nothing more stressful and if it goes on too long, than I really start to worry.

Spending time with her, I can't get over what a gorgeous torti she is. Her colouring is so rich and her markings are just beautiful; not to mention that her coat is very thick and when you pet her it's as if your hand is sinking in. I've brushed her a number of times since she's arrived and not only does she seem to find it relaxing, I've literally gotten a whole other cat out of her already!

Here are some new pictures of our little sweetie. She's been so good overall and I'm convinced that after she's feeling totally recovered, she'll be adopted very quickly. Yes I know I've been saying that alot lately but I've got another good feeling about this one. :)) 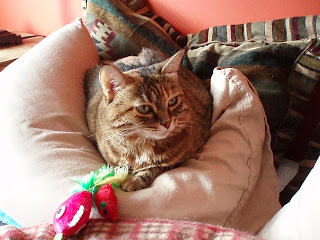 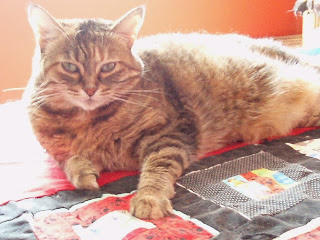 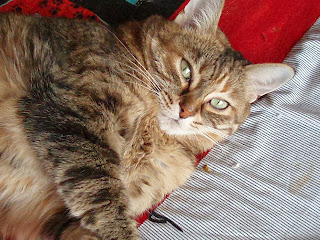 Posted by Safe Haven Hotel at 6:32 AM