BEING THE BAD GUY 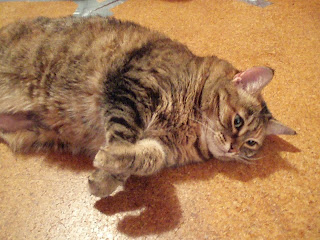 I'd love to say that this shot of Caramel is after a thorough game of play that plum tuckered her out, but unfortunately that is not the case. She is infact tuckered out in this shot, but that's only because she completely wore herself out fighting Mommy & Daddy as they tried to trim her back nails (she's front declawed), AND comb out a little knot that was forming on the base of her tail. At one point, anyone listening would have thought she was really being murdered and poor Rock & Silly both thought so as well - they were so alarmed, they actually came in and circled the foot of the bed, yowling (not helpful guys!)....

Her nails were clicking abit on the floor and the knot; well, Animal Services had already shaved a big spot on her back due a very large knot, and then I noticed just the other day, another tiny one was already starting. I tried to pry it apart with my fingers to avoid the stress for Caramel, but she made it perfectly clear that the easy route was not going to be the way this was gonna roll. The good news is that for all her fighting, I did manage to gently comb it right out with a special little comb I have (for just such occassions), thank goodness it doesn't get more use on a regular basis, AND thank even more goodness that we only had the one to contend with!

It's clear that Caramel doesn't appreciate assistance with her grooming and hopefully we don't have to play esthetician's again anytime soon with her.

So now that I feel like I've got some serious sucking up to do to get back into her good books; I'm wondering if tuna, temptations treats or abit of cold chicken will take me very far??

PS: There are two separate families interested in adopting her so we'll see what the week brings!
Posted by Safe Haven Hotel at 4:18 PM