The weekend started off abit trying with our Miss Flossy, aside from venturing out from under the bed for food or treats, we were finding that she appeared to be withdrawing more from us and becoming more anti social (or so it seemed) - so we decided that the best thing to do would be to block off the bed underneath so she could no longer hide under there and would be forced (somewhat), to interact with us a little more.

To say getting her out from under the bed against her will was a nightmare, is just about right. Not only did she actually begin hissing at us as we attempted to coral her out from under it, but she became so frightened of what was going on, she urinated all over the bedroom floor and then began making the most pitiful sounds I have ever heard come out of a full grown cat. Her meow sounds like that of a 1 week old kitten, it's so disturbing that I hope to never hear it again.

Once the bed was taped off, we decided to provide Flossy with someplace she could feel safe that would still allow us access to her; so we brought in a small carrier (door removed), placed inside some blankets, and situated it smack dab in the middle of the bed! At first she paced the floor and licked her lips nervously as we tried to soothe her, and I think I must have put her on the bed at least 40 times before she finally jumped up on her own and stayed there. It took afew more hours before she would go in the carrier and stay there but eventually she did and it was obvious from then on that she was calming down and felt safe in there.
We continued petting her and talking softly, and by dinnertime last night she was cooing and purring, and seemed to actually be enjoying her new bed wonderfully!

After coming home from work today, Miss Flossy actually came to the bedroom door to greet me (a little shy initially but still!), and I've just spent the last hour BRUSHING HER! Yes you read correctly..............she absolutely loves to be brushed and her coat feels softer than a cotton ball at this point! She even allowed me to brush her underbelly while I cradled her little head in the palm of my one hand - can you say awwwwwwwww???!!!

Here's tonight's picture - sorry it doesn't having her posing beautifully but she's been very busy grooming, grooming, grooming from within her new little boudoir. This little baby girl LOVES her wet food, her chin rubbed, her coat brushed and most of all, she's starting to love being loved!!!!!!! 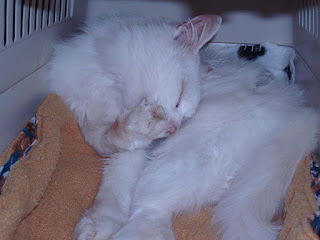 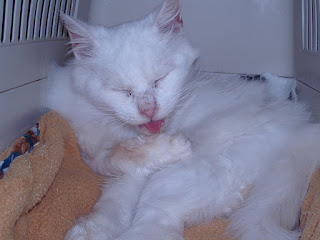