It's been a loooooooong time since we've had a DIVA in the house, but some things you can be reminded of very quickly! Bella is 100% DIVA, she may be small in size but believe me when I tell you that that is about all there is of her that is tiny.

This past week we've come to learn that she hates other cats, and I can assure you that that word hate isn't being used loosely here. I'd like to think that perhaps it's because she's in a house full of males, but having watched her this past week, I think it's safer to say that her Princess like attitude would extend over to other females - infact, I'm positive that if there were other females in the house, there would actually be some serious fur flying!! As it is, she does not allow Rocky, Silly or Farley to come within 10 feet of her, if they appear in the doorway of a room she's laying in, she lets out the loudest, most bone chilling sound that has them pinning their ears back and backing up into retreat as if they'd just met Medusa herself. She can be seemingly relaxed and appearing totally calm only to suddenly lift her head and with one whiff into the air, has a radar that has her able to smell the boys long before they've actually come into her line of sight. All she has to do is open her eyes and glare at them and as soon as they see her, they turn around like their toes are stepping on glass to head as far away in the opposite direction as possible. Rocky has made the mistake twice of trying to approach too closely and win out in a growl duel - she charged him and both times sent our poor sweet boy literally flying. In all the years of Rocky being in our home, we have NEVER seen him afraid of another cat, nor has he ever backed down and kept his distance - Bella (our Baby Girl), has changed all of that.

She is so affectionate and loving, but make no mistake she has her preferences even where petting is concerned, she lets you know if you're not petting her in the manner in which she'd like, and she also has a meow that is very clear in defining her disdain or disgust when things are not just to her liking. :))

But it's so nice to have her here - she's so beautiful physically and such a little darling to love and spoil - okay so she's a prima donna.......I'm just grateful that my hubby already knows all about high maintenance females or else this little girl could be giving us all a bad name. :)) 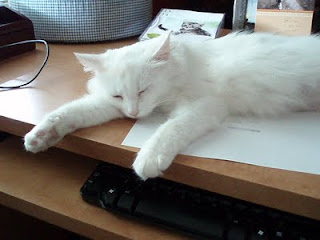