HAVING A LITTLE FAITH

I just got off the phone with Bella's new parents to learn that she's doing really, really well and is settling in very nicely. They've renamed her Princess and it just couldn't be a more appropriate name.........I snickered to learn that she's "taking over" (their words not mine) - so nice to see that her DIVA sense of self didn't falter one iota in the move! *L*

In my last thread I mentioned how hubby and I were planning to head out Saturday morning in an attempt to scoop up Red and finally bring him inside where he belongs. Well........... 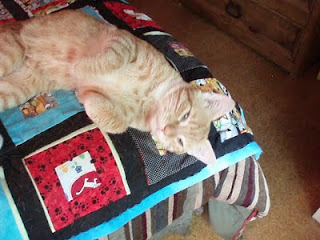 We were up at 6:00am yesterday morning and got in our car to head over to the street where we knew Red had moved to in recent weeks. We didn't get 50 feet down our street when suddenly he literally darted right out in front of our car as he ran to the other side of the road. I immediately got out and with my handy kitty catching device, (a bag of Temptations treats), proceeded to walk all the way back to our place with Red in tow, obviously starving and gobbling up the treats, faster than I could actually get them on the ground.

Once inside the house he was abit nervous and unsure initially, but as soon as we moved him up into his private quarters here at the SHH (Safe Haven Hotel), he began to purr, knead his paws and relax. By 5 hours later, he had eaten 2 full bowls of food and was snoozing on his new bed. He's painfully thin having quite clearly lost weight since leaving our street (and why that was we'll never know), and has a coat that is abit dirty, but since yesterday he's eating and drinking up a storm and has been busy for the last hour grooming himself from one end to the other. 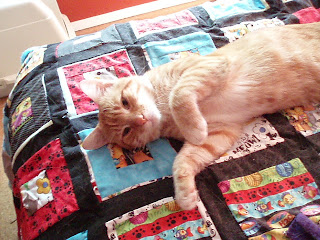 I will never forget how awful I felt that morning we put him back outside after his neuter surgery. But with the kittens here and then the emergency care for Bella, it was impossible to consider bringing him in. I vowed to myself that once those two situations were dealt with, he was next to be welcomed. I didn't care what it would take or how far I'd have to go to look for him, I loved this kitty from our first meeting back in April and although I felt as though I had let him down just one month earlier, I wasn't going to make that same mistake twice. But I'll be honest, when we were in the throes of caring for Calvin & Clarence and then Bella, I couldn't see how it was going to be that I could help in saving Red - I really doubted it for a time especially after he disappeared from our street (which I convinced myself was because he didn't feel that there was any hope here of being loved by anyone).
So at a time when I was feeling very stressed and overloaded in the fostering/rescue department, I did the only thing I knew would really help me to cope - I prayed that a way would be found to keep Red safe while we worked to have our current fosters adopted. As you know the kittens have been moved to a new foster home and Bella was adopted just days ago........I'd say that was definetly Heavenly Father's way of letting me know that He was mindful and there.

I don't believe in coincidences and I do believe that everything happens for a reason. This is Red's time and I'm so grateful not only for the blessing of being the one extended the opportunity to share in that, but also that he was watched over until the moment was meant to be. 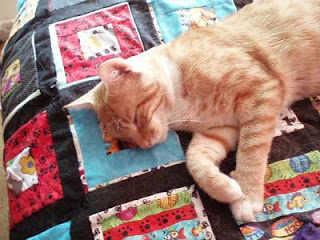