KING OF THE HILL

I meant to complete an entry alot sooner than this but with hectic work schedules, the other aspects of the rescue that I'm involved in on a volunteer basis, and of course all the stuff that is apart of the Christmas season (eg: baking, sending cards & parcels, etc, etc), time has gotten away from me and I just realized it was way past time to write!!

Now that Buster has been with us for afew weeks, we have firmly determined that his behaviour has been dominant in nature and that really and truly, this little boy would much prefer to be an only kitty. It's quite literally been a battle of wills between him and Rocky, as two very alpha male personalties duked it out to see who would get to be top cat. Those sparring matches have been many and as we probably could have predicted, Rocky has won virtually all of them. Knowing my little crank meister Rockstar the way I do, if this much time has elapsed and he's not accepted a new foster - well, he's not going to. Believe me when I also tell you that I think I speak for Rocky when I say that he truly hates Buster...........Rocky will not be challenged on any terms and especially on his own turf! As he hisses and spits and postures for the millioneth time, there are moments when his glaring looks in my direction are almost of the "Mommy, would you get this guy out of here already"!!!!! variety.

And what about Silly you might be wondering, well he spends the majority of his time trying to steer clear of Buster when he's on the "hunt" - since it would appear that my easygoing Ambassador hasn't got the guts for confrontation and would much rather just let Buster have his way.

Where is Buster in all this? Well the poor darling is not truly happy here either I'm afraid. He sleeps a great deal of the time and when he's not bugging someone, he almost has this frustrated look on his face - he too really wishes for a place where he can be Numero Uno and feel secure and happy enough to seek out more attention from his human friends.

The good news is that steps are underway to find Buster that one kitty only foster home! We're disappointed that its not working out the way we had hoped, but fostering also requires that your able to accept those instances when the house "mix" just doesn't work and decisions have to be made that are in the best interest of everyone.

Soooo more than likely Buster will be moved in the near future, but I couldn't resist sharing another photo of this handsome boy in the meantime - enjoy. :)) 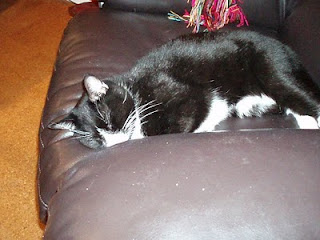