THE HAVE'S & THE HAVE NOT'S

I love being home with the boys on weekends. During the week everything feels so rushed and busy and stressful, that sometimes I look at them and feel such guilt because I/we don't have enough time it would seem to spend with them properly. One of us or both of us work late, we leave early, or we come home with a million things on our plate, exhausted, or preoccupied, and the boys don't seem to get the attention that I wish we could pour out to them every day. Such are the evils of working full time in demanding occupations - so when weekends come, I make it a point to try and stay home as much as possible so that I can flourish them with all the kisses, petting, and cuddles that they might have received less of during the week.

In spending yesterday with them, I watched as they lazed around, seemingly totally relaxed and thoroughly enjoying our time together, and my thoughts were turned to another kitty that at present is not so lucky.....
There has been a little adorable tabby male (very young) whose been hanging around our neighbourhood for the past few weeks. My neighbours immediately brought him to our attention since they know about our involvement in rescue work, and one afternoon we brought him indoors and placed him in our spare room with the intent of taking him in to have him neutered and vaccinated and hopefully placed in foster care. Well the attempt failed quickly and miserably as it seemed pretty evident that he wasn't enjoying being taken in from outside (I'm sure the un neutered part had alot to do with that), and he also seemed to find the presence of our boys on the other side of the door, extremely worrisome. So we placed him back outside with the promise to feed him, all the while hoping that he was someone's kitty who was given free reign to roam where he wanted.

Seeing him yesterday (and in previous instances), we're now convinced that his home are the streets. He is super friendly, VERY CUTE and extremely approachable - but he is also very skinny, very hungry and sadly, very much on his own.

This is the cruel reality of rescue work that I have always tried to keep my thoughts turned from; the kitties that are lucky enough to be rescued and thus protected, vs all those that never get that chance. Being the type of person that I am, I am easily consumed by the tragedies of life that are so completely overwhelming, it feels as though a band aid is being placed on the largest, deepest, most painful wound imaginable - and that it will never be enough.

Well now my thoughts are for this little guy whose spending all day and all night outside and as the weather turns colder, how those days and nights will become harder and harder for him. I've already put through a enquiry with the rescue to see if we can't find him a spot, but in the meantime I've begun looking for him now and worrying about where he is and is he safe. 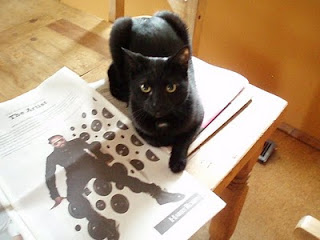 Rascal, Rocky & Silly, as well as the countless others we've fostered, not to mention the even countless more that have been and are saved every day, are all the lucky ones. Ones who fell into the line of sight of a rescue worker and were in an instant, rescued from imminent death and blessed with hope.

My prayer this morning is that there will be a way to help this little boy be placed in the direct line of that same hope. I learned a long time ago that I can't stop the painful consequences that come from anyone else's actions, but I can hope for the ability to do what I can to be apart of the solution.
Posted by Safe Haven Hotel at 4:35 AM