About a month ago, I noticed afew small (what appeared to be) feline acne bumps on Silly's chin. Nooooo problem, I had had occasion to deal with them in the past with our Martel many years ago, and had found that after expressing the points and washing them with antibiotic soap (prescribed by a vet at the time), they normally clear up quickly and without much todo. Shortly thereafter, I noticed that Rocky also had a small number under his chin as well. Strange I thought, that both of them would be affected at exactly the same time - and Rascal it appeared, was unaffected.

Initially I attended to their chins with less than normal perseverance. I could name a dozen excuses of why that was so, but the fact of the matter is that at the time, I didn't see it as a big deal and thought that they would simply clear up pretty much on their own. Boy, would I look back on those first couple of weeks and kick myself repeatedly (not to mention feel a horrible sense of guilt) of having been so lazy and laid back about it.

The short version of this story has Rocky and Silly's feline acne getting progressively worse. By the time I realized this however, it was looking VERY nasty under both their chins (aren't you glad I spared you pictures!) - and truth be told, I was playing major catch up trying to battle back. Just to be on the safe side I changed their plastic dishes to ceramic, treated everyone with Revolution (just in case), and up'd the application of the antibiotic soap. You guessed it, it wasn't going to be enough and eventually a trip to our vet was required to A) ensure it wasn't anything more serious and B) to figure how what was the best course of action to treat both of them. 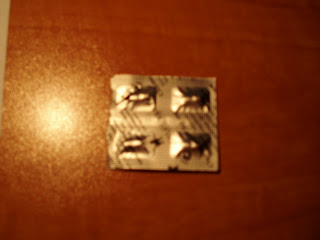 These little packets above have become both a saving grace and a nightmare all rolled into one. We are now on our 2nd round of antibiotics and their chins have only started (in the last few days) to even resemble some sort of healing. What's made their presence in our home so awful is that Rocky and Silly both have become extremely afraid of having their chins washed (mainly due to how painful both had become), and these little pills, as small and as un-menacing as they look, are making poor Silly feel so sick to his stomach that I can practically see the waves of nausea on my poor little boy's face everytime I try to feed him and he just about gags. We have also discovered that Silly HATES to be pilled, and finds this part of our regular routine at the moment probably worse than all the other nasty stuff we have to do twice a day at present.

When someone said "You live and learn", they weren't kidding. I pray that the acne doesn't reappear after this round of pills, and may I never again be so negligent in my responsibility to care for my boys - I'm positive at this point that Silly for one, is absolutely wishing he had the ability to inflict as much discomfort and unpleasantness on me right now as I've had to on him in the last few weeks.

And how is Rascal you might wonder?...............he hasn't gotten even one bump under his chin and has spent the last few weeks observing the goings on with the same amount of quizzical wonder that he approaches everything he's not sure of - it's that expression that says: "Geez I wonder what all the fuss is about" *L*
Posted by Safe Haven Hotel at 3:46 PM