ALL GOOD THINGS COME TO THOSE 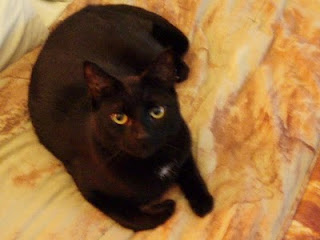 Another rescue volunteer has a male foster that looks so muuch like Rascal, it's pretty neat to put their two pictures side by side - even more so knowing that there not from the same litter. They are approximately the same age, both have dabs of white splashed in the same places, both have the same facial expressions and both are similar in tempermant. This foster Mom has been fostering her little guy for close to a year and it appears as though his forever home is imminent, since he had someone meet him that has fallen in love.

I don't want to think about how I will feel if Rascal is here close to a year and a forever family should appear. Someone put the question to me just the other day, and I became quite uncomfortable; preferring instead to change the subject instead of contemplate how it will feel to let him go after that much time with him as a member of our family.

In talking with my husband just the other night, I made the comment that I couldn't believe that a cat so cute and adorable, was still waiting for his forever home; to which he replied........."Well, when you haven't seen something for yourself, sometimes it's hard to realize what your missing out on".

All the cats in shelters and foster homes the world over deserve that loving indidual/s that will cherish them - but of course each of us feels that our rescue or foster kitty should be next to be chosen. That's how I'm feeling today, that it's such a travesty that Rascal is still waiting, and in all honesty, a little anxious about how much harder it will be to part with him if the waiting continues for too much longer. 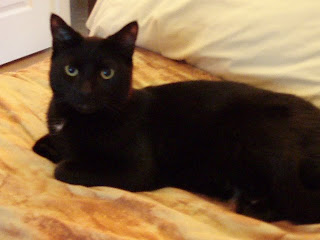