Just today I was thinking about what my next entry here could be.........Rascal is still very much with us and as these next few photo's will reveal, he's as much a little character/charmer as he was from the minute he climbed out of the carrier upon arriving! 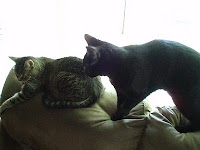 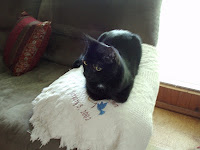 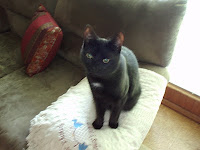 I had to literally make a running dash for the camera to capture the first scene - otherwise noone would believe me when I wrote about what a little mischief man this boy is. If your still wondering what exactly your looking at, that's Rocky relaxing on the back of our loveseat in the livingroom (which is one of HIS spots), and Rascal sneaking up on him (or so he thinks) to have a sniff of his fur - or to annoy him, whichever will get him in the least amount of trouble.
Surprisingly, Rocky didn't stir except for a low, deep growl and the slight tilt of his head, as much to say, "OK pal, your treading on very thin ice here - one more move and your toast"!

The next two shots are of "darling" Rascal (can those two words even go together?). He settles down on the opposite end of the loveseat as if to profess, "What!, I wasn't doing anything".......and so is life at the Safe Haven Hotel currently with our latest houseguest.

I had one adoption call for Rascal earlier this week but unfortunately the potential adopters weren't a good fit so it's still the waiting game.

I joked with another volunteer at the rescue that short of a potential adopter having a recommend from the Savior Himself - fat chance of getting to take this little cutie pahtootie home!!! :) :)
Posted by Safe Haven Hotel at 4:53 PM