MATTERS OF THE HEART

I had another adoption call for Rascal this past week and I turned the family down - again. You might wonder to yourself (as I have internally at times), as to what exactly it is we're doing.

Here we are, fostering yet another black cat who we've already had with us for close to 6 weeks, and I've turned away not just one potential forever family.........but two??? If you've read some of my previous posts or visited the main page of the rescue group's website, you'll know that black cats are the hardest to find forever homes for. I won't dredge back up how ridiculous I think people's perceptions and superstitions are regarding this whole "black cat" thing, suffice it to say that - it's alive and well today, just look at how many black cats and kittens are sitting in foster care and shelters city or nationwide, and you'll get the message.

So how is it that I could turn away two separate enquiries for Rascal from what sounded like wonderful people in both instances? Well, it goes like this:
Neither of these families had any other pets and neither were prepared to adopt another cat immediately in order that Rascal could have a friend. We have been observing and getting to know Rascal for weeks now, and although he can't sit us down and tell us what kind of a home he'd like to go to, I think it's safe to say that our guts tells us it's not one where he would be an only kitty. He is far too friendly, social and interactive for that to be the case. I learned the hard way - actually the hardest way possible, a number of years ago, that following your gut in fostering is essential. Essential for the happiness of your foster, and essential for you to rest easy in knowing you made the right decision for that little soul that was in your care. 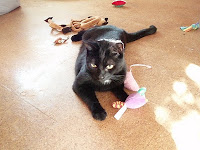 I call this my "Caesar" lesson.....
Caesar was a 5 yr old long haired cold black male that came to us from the shelter after his family dumped him there due to a new baby *NICE*
For the first 10 days that we had Caesar, he hissed, he spit, and he growled. He backed himself into every corner of our bathroom and proceeded to let out menacing sounds that make Rocky's temper tantrums almost laughable - well almost. He would not look at us, let us touch him, and he made it abundantly clear that he was one VERY angry and VERY ticked off cat!
At the three month mark, although still somewhat skittish, he had accepted the fact that his previous forever family was gone and that he had to make the best of where he now found himself. Gradually he allowed us to love him, to pet him, to talk softly to him, and yes, even at times would allow us to sit beside him. It was ALOT of patience, and hard work, but it was worth every second to see him settle in and settle down.

Shortly thereafter, a family with teenagers (3 to be exact), called wanting to meet him. I spent literally a full hour on two different phone conversations taking great pains to explain to them, the stress that he had endured to come around, and that I wasn't sure what his reception would be to them or to the prospect of being removed from his now familiar environment. But they were adamant and persistent, and so I agreed.
They drove a considerable distance in a snowstorm to meet him. They were nice enough but Caesar was terrified and would barely poke his nose out from behind our sofa. After about 10 mins of being there, they expressed their desire to take him home. I was taken off guard and felt confused, uncertain and pressured. I'll never forget trying to weigh what was the right thing to do and was this, Caesar's chance at forever happiness?

I agreed, getting him the carrier was a nightmare, getting them out the door listening to him howling was beyond heartbreaking, and watching them drive away knowing how scared he would be that evening - well that was enough to make me want to hide under my own bed.

Three weeks later, Caesar wss dead. The family's vet indicated that he had developed a serious urinary infection which there was little chance of him recovering from and which was likely due to the extreme stress he endured as a result of going to yet another new environment, the family blamed us, insinuating that we had knowingly allowed them to adopt a sick cat, and us, well were were just devastated that Caesar hadn't found his happiness at all - what he had found was a way to escape the misery he thought he had once again been forced to endure.

That whole experience has never left me, nor has the invaluable lesson I learned about listening to your instincts, to your gut, and keeping the well being of your foster at the forefront of your concerns. Caesar may very well be alive today if I had followed the feelings that were deep inside me to refuse those people - because I didn't, his unhappiness cost him everything.

The people enquiring for Rascal all sounded lovely, and I'm sure that there is a kitty out there that will find his/her forever happiness with each of them........but my heart told me that Rascal wasn't the one.
Posted by Safe Haven Hotel at 4:17 PM