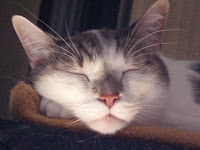 I couldn't very well write about our darling little Rocky a.k.a. "Stinkerboy", and not also dedicate a page to our charming Sylvester or "Silly" as he's affectionately known at home.

This is him - this is probably one of my favorite photo's of him. My husband loves this one so much that I had it turned into a mousepad at Black's which we use in our home office. Silly was a foster that came to us after arriving at the shelter with a body harness on. At first we couldn't understand why when he had been so obviously loved by someone (and cared about enough to have a body harness on to ensure his not being lost), they wouldn't have come looking for him...........well, that was until we got to *know* Silly! (Which I mean in the most loving of ways)

This sweet boy has obviously been paid attention to in VERY ROUGH ways by a person or persons in the past. We also discovered that he has a very low threshold for "play" and if his temper gets the better of him, his spirit can turn from lovey kitty to wild cat in about ten seconds flat. Luckily for us, he gives all the signs of becoming too spirited (as we like to refer to it), long before he actually reacts, but if you choose to ignore them, or push that envelope too far, than watch out, because react he will. My husband's hands have looked like hamburger meat on countless occasions since Silly became a permanent member of our family (which has been about 4 years now), and only just recently, his door dashing techniques found him flying past us while we were in the midst of moving houses, and our efforts to retrieve him caused my husband to be seriously bitten and scratched - so much so, that antibiotics and a trip to the ER were required! (I did say he was sweet right?).

You may be wondering when you've read up to this point, why we decided to adopt him? and the answer lies in his ability to be just as loving, adorable and sweet as he is, headstrong, unpredictable, impatient and feisty.
We suspect that he too has been abused at some point and not treated very nicely, thus his short fuse and volatile nature at times. But in 4 years we have also witnessed an amazing transformation in this boy.
First off, he absolutely loves my husband - I mean LOVES HIM! When he gets ready for work in the morning's or needs to go out of the house for any reason, the saddest look comes across Silly's face and his demeanour completely changes the moment the door has been shut. All of my comforting techniques are completely lost on Silly when his Daddy isn't home, and he's the first one to come to barreling from another part of the house when he realizes that Dad is back! He's happiest when he can curl up beside my husband, and completely trusts him at this point, so much so that he'll go fast asleep and always does so, with one of his paws touching Daddy. My husband is also the only person that Silly will take discipline from (try as I might), it's his voice and his alone that commands Silly's attention and full respect - gotta just love that male bonding thing.

But most important of all, Silly is our Little Ambassador to every foster cat that arrives to stay with us. It's him that welcomes them first normally with non threatening gestures that can include a gentle meow, he who gives them plently of space to become familiar with their new surroundings, he who quite literally shows them all the new and fun aspects of coming to stay with us (including his toys), and he who is completely understanding and patient with them as they seem to gravitate toward (and take over), all of his favorite sleeping spots!
Silly is also very protective of Rocky if a new foster should exhibit any initital signs of wanting to dominate The King - he immediately puts himself between them and Rocky to ensure that everyone understands - there's no picking on the little guy with the wobbly walk.

Every foster home should be lucky enough to have a beautiful boy like Silly who can be their Ambassador and we are continually thankful that we have him in ours. It has helped tremendously to ease the stress and fear new fosters will oftentimes feel as they venture out into this new world known as our home, and it's always so heartwarming to watch as our handsome Silly with the smudge across his nose, finds room in his heart yet again, almost as if to say "Welcome, let me show you around".........
Posted by Safe Haven Hotel at 9:48 AM