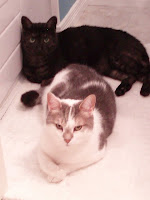 I'm always amazed at how cats can be alot like kids (in more ways than one). I'm referring specifically to the way in which they pick up on each other's habits, and suddenly, that which was one's habit or new found fun, suddenly becomes another's.

Case in point. The photo above (I know isn't it too cute) is Silly and Maxwell (our current foster), this morning, sharing the smallest of spaces, which in this particular instance, just happens to be our bath mat.

I bought this bath mat brand new once we moved into our home - to compliment the rest of the features in there. It just happen to be a coincidence that it matches our boy Silly's coat perfectly, and when he sprawls out on it (as he loves to every morning once it's put down for showers), he's resembling that perfect painting or cat postcard - too handsome for proper description. I have however tried (very unsuccessfully), to discourage him from laying on it because it's soft cream colour means that the least little bit of litterbox dirt or dust, or any type of "fluff" that Silly might have adorning his coat, is likely going to end up on it - and what was once clean and crisp looking; becomes dirty in appearance after he's had his lay in and decides to saunter off.

Well what's good enough for Silly seems to have also brought Maxwell around to the thinking, that it's also good enough for him! Not only has Maxwell taken to stealing time on the bathmat when the opportunity presents itself, but as this photo confirms, he seems to be of the mindset as well that he'll find room for his little derriere at the exact same time Silly has his turn - and then neither of them has the upper hand in enjoying something that the other is not!

All we would need now is for Stinkerboy to wobble into the bathroom during the course of one of these sit in's - and we'd have "sharing time" turned into "it's mine so clear out time". Rocky being MR. JEALOUS that he is, doesn't appear to have witnessed this display firsthand (the playing nice in the sandbox) as of yet which is just by sheer luck I'm sure, or he'd be sure to let everyone know that it's HIS bathmat, HIS bathroom, and that Silly is HIS roommate and HIS alone! *L*

People who say that cats aren't interesting or that they are aloof and no fun, really need to drop by our place. I don't refer to them as "our kids" simply because they live under the same roof.............they really do like to play and fight and mimic each other just like their human counterparts, and we won't even get into how smart they are!
Posted by Safe Haven Hotel at 7:28 AM