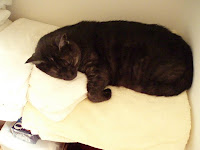 You've heard it said before I'm sure...........that ignorance is bliss. In the case of cats/kittens that are surrendered to shelters, abandoned on the streets, in empty houses/apartments, tossed aside and away like yesterday's newspaper, I can only pray that this is the way it is for all of them. That they aren't really aware of how awful their fate has suddenly become, that they don't really comprehend just how bleak their chances of "making it" are.

I was thinking about this this morning as I readied myself for Church and I came upon Maxwell (see photo above), in what has become one of his favourite sleeping spots - our linen cupboard. He snuggled down and settled in for his morning snooze after having a very tiring start to the day what with breakfast, a litterbox break, some loving time, a game of chase and finally.........floor hockey with his favourite stuffed mouse!

Maxwell has now been with us almost 6 weeks and as far as he's concerned, he's home. He has no idea that this is his refuge from the storms of life until his forever family finds him. He has no idea that the smells, sounds, routines, and roommates that he's become so familiar with, are only temporary, and that at some point, he'll yet again find himself "settling in".

It's at this point when I seriously wonder if I wish I could explain it to him or not. Would I want him (and other fosters just like him), to know that where they sleep and play and eat, are only for the interim, or would I rather protect them from that and have them believe (as I'm sure they do), that where they are is where they will always be?

This is only a stop on the road in life for Maxwell, and although I'm comforted in the fact that we could be there for him when he needed it the most, I can't help but watch him now as he saunters through our home as if he's always been here, and worry somewhat that the next move and set of changes (although forever in nature), will have him sad, frightened, and believing that he's once again been abandoned.

His forever home will be so happy with him once he finally is united with them(because he truly is a little treasure), and we will continue to love him until such time as they can find him, until then, he's completely happy and completely unaware...........
Posted by Safe Haven Hotel at 12:04 PM