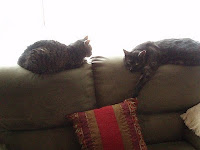 I've written before about our one cat Rocky. He's the top cat in our home, both with his roommate Silly as well as with all our fosters - he rules and he never let's anyone forget it. That's why it's even more poignant when I finally catch him relenting and accepting a new houseguest.

This picture was taken this morning as I sat reading in our livingroom (Rocky is to the left in this photo). One of Rocky's favourite spots in our new home (we've only been here since the end of January), is the back of our loveseat which allows him to face the front of the house and watch the goings on there.
Maxwell (our current foster), also seems to have taken a liking to the back of this same loveseat, and up until this morning, he and Rocky would have to alternate time there since Rocky was not prepared in any way shape or form, to share.

This picture says it all. Rocky has now accepted Maxwell's presence - begrudgingly thought it may be, and his allowing for Maxwell to not only share this space, but to get so close to him in doing so, really tells us that underneath Rocky's rough, ornery, jealous, exterior - he is soft and loving and kind, even if he's never going to readily admit it.
Rocky you see, is all about protecting. As I've mentioned previously, we suspect he was horribly abused before coming to live with us, simply by the way in which he acts whenever he is faced with a situation in which he is not familiar. We had him probably 2 or 3 years before we ever heard him purr when we'd pet him, and his huge fear of strangers has him running to hide under our bed when they'd enter our home, up until just recently. Why, even now, when we come home from work, he's making a run for the stairs that lead to our room since the noise of someone entering the house makes him feel very threatened it would seem.
He has a growl that is as menacing as that of a mountain lion and his hissing abilities are well intact. He also becomes extremely nervous if your approaching him or attempting to handle him in a way that he's not comfortable with - he'll turn on you in two seconds flat if he at all feels nervous about what is transpiring.
It's all about protecting............protecting himself, protecting his environment, protecting that which makes him happy and brings him comfort, protecting the things that make him feel safe and which he's grown to recognize as his and noone else's (which includes Mommy's attention).

But as difficult as he makes our fostering in terms of his acceptance, which can take anywhere from a few days to a few weeks, we're always certain that eventually he'll give us that golden sign that we have his vote of approval - at least for this latest houseguest; the next one will be a whole different story..........well, at least initially.:)
Posted by Safe Haven Hotel at 8:21 AM