"M" IS FOR MAXWELL 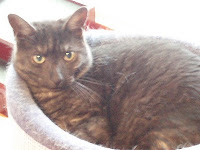 Our latest houseguest has been with us almost a week and we've named him Maxwell. This boy waited upwards of a month in the shelter for help and I'm only sorry that it had to be that long. But, one of the first golden rules I learned many moons ago when we first started fostering, is that in many ways you just simply cannot allow yourself to dwell on what these cats have had to endure once they are safely with you. It may not be this way for everyone, but for me personally, dwelling on such negatives is very emotionally draining and I would much rather put my energy and focus into the positives that come out of helping these little souls feel safe and loved once again and ultimately bloom back into wonderful felines, than in replaying the unpleasantness they would have had to endure to get to us. Don't get me wrong, I'm very aware of what a shelter environment is all about, as well as the effects of abandonement - I've seen the results first hand, but once the foster is in our care and home with us, I focus wholeheartedly on trying to make them feel as safe as possible and to reassure them that everything is now going to be okay.

Maxwell has just been a little angel since arriving. He had a bout of the infamous "URI" but luckily it wasn't as severe as I've seen. It did however require hours of painstakingly coaxing him to eat, and because the poor guy was experiencing congestion, it required wet food that was even made way more smelly by the heating process. Boy, it doesn't matter how many times I smell that stuff, the look and aroma always makes me just want to gag.........but the important thing is that Maxwell has done incredibly well and for the most part, ate all by himself without much force feeding have to be introduced. *Thanks goodness for that*

At first I was a little worried about his coat as it appeared very strange in appearance, but I think the stress of the shelter had simply caused it to become very unhealthy looking - nothing that some serious brushing couldn't fix. Luckily, this boy just loves the brush and we've spent quite some good quality time, brushing and eating, eating and brushing - it all seemed to go hand in hand. My little wire brush is like a god send - I can't count the number of times it's helped to win a new foster over in the very early hours of us meeting.

Maxwell is now on the mend and this morning he was "let out". That means that he goes from his private quarters to having the experience of our whole home to roam around in. As I type, he's adjusting to the stalking and growling of our sweet little Rocky........who upon first meeting a foster is anything but sweet!
He is handling the introductions to our Rocky and Silly very well and by all first accounts, doesn't appear to mind the presence of other kitties at all which is a super added bonus (his chance of adoption is increased if he's willing to have a cat friend).

So for today, it's monitoring the exchanges and ensuring that no serious fur fly's. I already have "that feeling" - the one that tells me once Maxwell's pictures and profile go up on the rescue's website, it won't be long before his forever family finds him. Have I mentioned how much I love Happy Endings?? :) :)
Posted by Safe Haven Hotel at 6:20 AM