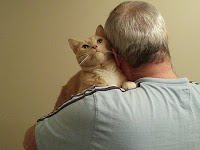 There's only one other comment I hear frequently from friends and acquaintances when it comes to our fostering and it's the, "I don't know how you can bare to give them up once they've come to live with you" - one.

I'll say honestly that when we started fostering, I never even considered the possibility that we'd become so attached, we'd want to keep them permanently. That may seem somewhat strange or naive to others, but it just never entered my mind as I guess it would most. I was so excited at the prospect of helping to get them out of cages and into our home where I could spoil them rotten, how it would effect me or us emotionally, was never apart of our preparation - at least not at the outset.

The only instance where we decided to keep a foster was when one of our own furbabies had passed on and we thought that the foster staying with us would make a good fit for the male that was left behind. Rocky and Silly (our two boys now), were both fosters that we've adopted formerly, however, they both became permanent members of our family through the deaths of Miss Remy and Chester. Other than that, every foster that has come to stay with us, has either been adopted or had to be euthanized, due to sickness or disease that resulted in their suffering **Note: we've only lost two fosters to death since beginning our fostering**
I admit now that there have been those houseguests that I have cried my heart out the day their forever family came to take them home. They are usually the ones that have grown very attached to me, want to sleep with me, lay on my lap, look up me lovingly all the time, come when I call them, and seem to have singled me out as Mommy. Not all fosters will exhibit all the same characteristics, some are more friendly than others, some are extremely loving when others are less so. Some are friendly but prefer their own space - it really does depend on the kitty just as much as it does with people.

Regardless of their personal makeup however, it's always extremely difficult to accept that enquiry call and then make an appointment to have that someone come out and meet our little friend, if he's been with us anything past a couple of weeks. Obviously the longer they are with us, the more probable it is that an attachement in some form has taken place, and I'd be less than honest if I didn't say that sometimes, I even dread the meeting.

I've had instances in the past when I've known that an adopter sounded really "good" over the phone, and as a result, felt in my gut that most likely the adoption would go ahead and our little friend would be leaving with him or her. If I've become extremely attached, and there are just feelings that are indescrible to a large degree that confirm that to me where no words could adequately convey, than I also know that I'm likely to have tears and a huge lump in my throat as they prepare to take him. Sometimes I have to turn away, leave the room, even go outside, and my golden rule is always to ensure that I've said my goodbye's to the little guy when the feeling is overly favourable, BEFORE the potential forever home arrives because it makes it less uncomfortable for everyone.

There has not been one foster come through our home in all the years we've been doing work, that we haven't wanted to keep. Some more than others, but at the end of the day we would have loved it if we could have kept them all to become members of our family permanently. The minute they arrive, we love them as we do our own and though they may be fosters on paper, for us, they are our babies and we are Mommy & Daddy until their forever home arrives and offers them their 2nd chance at happiness. It's instant and it's complete, and we do not know of any other way to do this work than to give all that we have to each cat that passes through our lives.

So yes, the attachment factor is there and it can be incredibly strong and unbelievably painful when that tie has to be broken so that they can move forward in life and go with someone who promises to love and cherish them forever - but I wouldn't trade the pain and worry one iota. The driving force behind our allowing these fosters to be continually adopted from us, is because every time I see one of our little guys crying inside that carrier as he's being readied to head to his new home, I also force myself to see the eyes of the next little fella that sits lonely, depressed and unloved in a metal cage that isn't big enough for him to turn around in, and which could very well be his last stop on the road in life before he is put down for no other reason than noone wants him, and I see that adoption through because I know it means we can help another. He too deserves that second chance at a life of happiness and love and so we bid goodbye to our current friend because we know that there is another that waits patiently, hoping that someone is coming for him too - and we want to be there.

The attachment factor is real and it can be hard, but not half as real or hard or painful, as knowing that beautiful animals wait in horrid conditions and environments for someone to help them, and that we may be their only and last chance.
I can live with painful goodbyes because I know that tomorrow there is another hello in my future - to meet another cat that needs our home as his Safe Haven.
Posted by Safe Haven Hotel at 4:26 PM