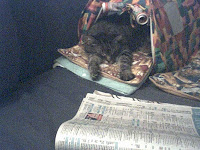 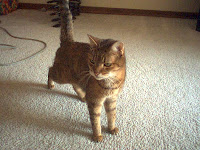 I have loved animals for as long as I can remember. I had a grey/white cat named Smokey when I was little girl of maybe 12 or 13. Lots of people will say that their cat was "The Best Cat", but Smokey really was.

He slept with me every night and was always close by whenever I needed him. We moved from the only home he had ever known when I was just shy of my 16th birthday, and he was never settled again. The jaunt back to that old house was probably a half hour or 45 minutes, but somehow Smokey always found his way back there. Our neighbour at the time was a veternarian and it was she who had originally introduced us to each other after Smokey had somehow ended up at her clinic. She'd call us to let us know he had once again returned to the now empty house and that she was feeding him, but he would never stay with us again. Eventually, everyone seemed to get tired of making the trek to go and bring him back, and although I don't remember the specifics of why I never made that trip, I wonder now if it was somehow because I just couldn't bare to see his sweet sad face as he begged me to return to our old haunt where we had enjoyed each other's company so much and been there for one another when we needed each other the most.

After Smokey, it was obvious that I loved cats. Oh, I love all other animals as well, but I have always felt myself especially drawn to the paws and whiskers of the feline population. I obtained a gorgeous little tortoishell "torti" female from the THS here in the city when I was about 21. I will never forget the first time we met.......I walked into the "Cat Room" at that shelter and she was in the first cage to my right. A tiny little 6 month old sweetie pie who was adamant that I was not going a step further into that room without noticing her! She had her skinny little arm stuck so far out of the cage trying to get my attention that I often wonder how she didn't end up doing some damage.
She was a beautiful golden sand colour, with flecks of orange and brown and white all weaved through her coat. She had the most adorable little feminine face with long white dark whiskers and green eyes that were as little diamonds; but it was her personality that defined her! She was a true PRINCESS and she strutted her stuff, never letting anyone forget that it was HER WAY or the HIGHWAY.............she was my babygirl, my little "Beemer" as I used to lovingly call her and to this day, her impact on me is such that although she has been gone almost 5 1/2 years now - there has never been another female grace my home. Miss Remy as she was known, was absolutely precious to me and I have never met a cat like her since.

Her partner in crime for the 16 years I had her was a stunning, big dark brown marble coloured male name Martel "Marty" that I drove 2 hours in a snowstorm to adopt from a woman up north who was running a cattery out of the basement in her home. He was painfully shy and abit of a big lug it seemed, but he was gentle and didn't have a mean bone in his whole body - I knew that Miss Remy would love him and he her, and more important, I knew that he would let her be the boss!

We were the three musketeers through alot of ups and downs in my life. They were my best friends, my confidants, my allies, my solace - they comforted and loved me unconditionally and they were always there when I needed them.

I lost Marty first. He became sick with cancer at the age of 15 and we had to make the painful and gut wrenching decision to bid him goodbye. It was 5 months after his death when I began to seriously consider how I could best pay tribute to him and I came to think about fostering.......

Miss Remy was the same age as him, and I agonized long and hard over what bringing another cat into the home would do to her at such a senior age, but it was decided that we would only know by trying; and so our journey into the world of fostering had begun.

I dedicate this blog to the precious memories of my little Beemer and my Marty Farty - two very special furry friends that will forever be the reason the Safe Haven Hotel exists - for the little souls, who like both of them had to once upon a time, face the fear and feel the sadness that comes with abandonement and neglect.
Posted by Safe Haven Hotel at 4:47 PM