I start by apologizing to all you Shakespeare lovers out there.............we've decided to rename Malvolio. It just wasn't flowing off our tongues and more importantly, after 2 1/1 weeks of using it continually, he doesn't appear to know it even slightly. This seems to happen alot we find and we're often left wondering if these same owners ever even used the names they give to their pets? My two boys know their names (and their nicknames even), at the drop of a hat so we're always baffled when rescues come to us who act nameless. That said, we've decided to call him SMARTIE - because whether he's nervous or inquisitive, his eyes become the size of smarties! :)) 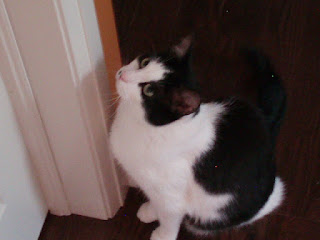 We also reintroduced Smartie to the entire lodgings here at Safe Haven late last week and in just afew short days, he's doing much, much better. He's still incredibly nervous with sudden movements and certain objects (a real fear of plastic bags is apparent), but he spends more time out now than hiding, and will come running when the food dish is being filled (typical male - always hungry) :)). He is also still easily spooked when being petted but that too is showing signs of improvement, and we've even heard him purring albeit ever so slightly afew times now while having his chin scratched. 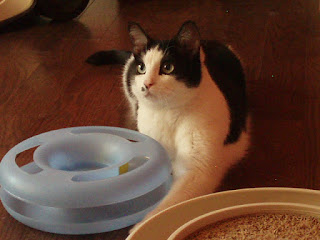 The biggest part of this update is that he is REALLY enjoying the company of our boys, loves to play hide n' seek, and has alot of kitten like antics that are just too adorable to watch unfolding. We will absolutely want him to go to a home with another young cat like himself because we suspect that as he's had the boys to observe and has sensed their feelings of safety; it has helped his own. Our boys are too old for all his desires to play but at least it's wonderful to see him engaged and oh did I neglect to mention how chatty he is! - a real talker. 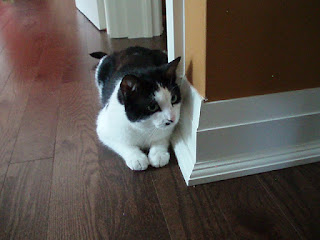 His forever home will need an experienced owner and lots of patience, but we see the light on the horizon and once again it looks beautiful.
Posted by Safe Haven Hotel at 12:56 PM