So far there have been two different adoption enquiries about Marigold. The first one wasn't a fit and the second which was an initial phone call earlier this morning, certainly was not!

As soon as I began chatting with the potential adopter, my spidy senses were tingling. A first rate "know it all" who thought the fact that Marigold came to us with a dry, rather lack lustre coat was "strange" (her word not mine), and who when I began to explain that Marigold would need help at present in keeping her derriere clean, cut me right off to say absolutely not! I responded to say that I appreciated the honesty and that I would let the adoption screener know it wasn't the right fit; and promptly ended the discussion.

I admit it, it's bugged me all day. Not that she wasn't willing to take Marigold on, because goodness knows that judging by her demeanour on the phone call, this adoption would have NEVER gone through; but it was moreso the way in which she conveyed herself. What I wish in hindsight I had said to her, was that it was wonderful she had been so forthright in her displeasure to consider Marigold, because infact I would never allow her to be adopted by someone unwilling to care for her the way she needed!!! This woman was abrasive and rude and it has stuck in my craw!

All that said (or vented), I realize that there are few people who will willingly want to adopt a cat with this issue but quite honestly it takes 5 minutes daily, and it's just not that big of a deal. I comfort myself by realizing that all those who will pass her by because of it, miss out on a really nice kitty to have as a friend. 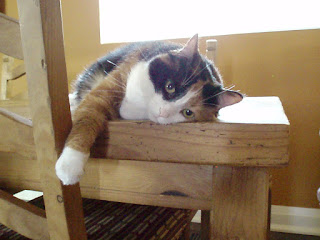