Late last week I asked if Marigold could be the "featured" kitty on the rescue's main page of their website in the hopes that it would provide her with more exposure and increase her chances of getting adopted. That was done on Friday - on Saturday morning, I got a call saying that there was another potential adopter for our girl.

We initially chatted via phone first and I answered their questions as it pertained to Marigold's current grooming issues and her overall temperment. Than we made an appointment for yesterday at dinnertime for them to come by for the the meet n' greet, 90 minutes after that, I was saying goodbye to our princess as she headed out the door with her new parents!

They were smitten with her almost instantly and true to her diva self, Marigold was confidant, calm and endearing. Even our two boys seem to be totally relaxed during the visit, almost as if they too knew that their days of putting up with Miss FancyPants were almost over. *L* 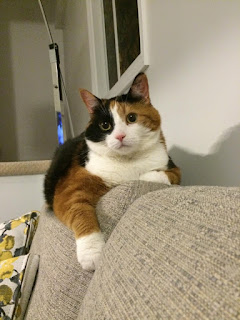