I think if Marigold were a woman, she would very much remind me of "M" from the James Bond films. A lady through and through, she's tough, no nonsense but abit soft deep in the middle if she allows you to see that far. 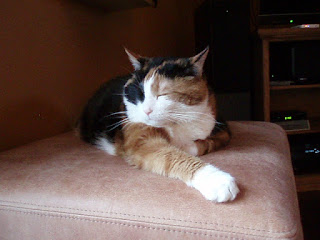 There was an adoption call for M last week which resulted in a meet n' greet yesterday. I've come to the conclusion that I get nervous and agonize over the ones that somewhere deep down inside I know are likely fits; the ones that never are I never seem to get quite so worked up over in advance. This apppointment was absolutely the latter. They were a young couple, nice and friendly but something just didn't seem to say YES. They came, they met Marigold who was not shy in the slightest, came down to greet them, and even rolled over onto her back to put all four paws in the air just in case there was any question of how cute she really is; and yet they hardly interacted with her at all. They were more content to stand and talk to me, glancing at her occassionally, than they were in getting to know her. It was quickly apparent that they wouldn't be the right home for our girl and in not so many words, that was the opinion I left them with.

Totally fine on this end, as we're all doing just fine here and as always, we're in no rush to usher our guest out the door into the arms of the wrong forever home.