Shortly after Quincy's adoption on Friday evening, we received word that there was a sweet girl at the shelter who had been waiting patiently for a whole month in a cage for her second chance at happiness. Initially we never saw her picture and knew nothing else about her except that she was a calico and had been an owner surrender.

Bright and early Saturday morning we headed out to the west end of the city to finally break her free of her cage..... 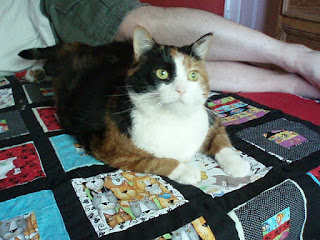 We've named this pretty one, Marigold. After only afew short days we've already begun giving her exposure to the boys and the rest of the house in the evenings while we're awake and then retiring her to her room for overnight so she (and us), can relax peacefully. Tonight is her 2nd night out and except for some serious hissing on her part to let the boys know she won't tolerate any monkey business, she's been doing extremely well.