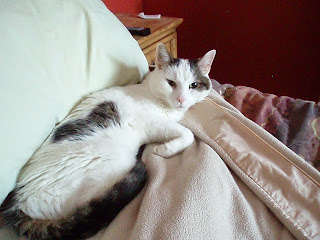 Painfully thin and quite nervous with all the new sounds and sights, he's already out of his guestroom and has explored the house thoroughly. Although he looks quite fragile looking physically, it's been quickly apparent that he's a survivor and was not interested in any kind of soft food just a couple of days after his dental (he had three teeth removed), holding out instead for dry! 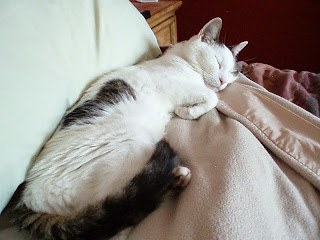 His meeting Rocky & Silly has gone remarkably well so far. Very little hissing or growling and Rocky isn't stalking him as he normally would new arrivals. We often think that when Rocky acts this way, it's because he realizes quite quickly that the quiet, subdued ones that have lived it rough would beat the snot out of him and so he keeps his nastiness to a dull roar. *L*

Posted by Safe Haven Hotel at 9:51 AM