We had an adoption call for Fisher just 24 hours after he went up on the rescue's website. His good looks were never in question for us, but even we were somewhat shocked with an adoption enquiry that fast!

I chatted with "L" at length about Fisher's nervousness and shy nature and about all the great progress he had made thus far. I also told her that he was one very sweet boy that really needed a home that would offer him lots of patience and reassurance. She didn't seem daunted at all and so we set up a time for a meet n' greet earlier this evening. I remained skeptical that this could really be "the one", and I think I even said to hubby at one point right before she came..........."I don't think this will be the fit".

Now it's almost two hours later and Fisher has been adopted. "L" was LOVELY, calm, kind, and loved Fisher instantly. And our shy, scared little man? - well he was so friendly and allowed his prospective Mom to pet him a number of times - he even ate treats that she fed him!!!!! We were so proud of him and had to admit quite quickly that this was infact "it".

She's going away later this week so she won't be picking him up until about 10 days from now, but the realization that our sweet boy has his forever home makes the wait more than worth it. 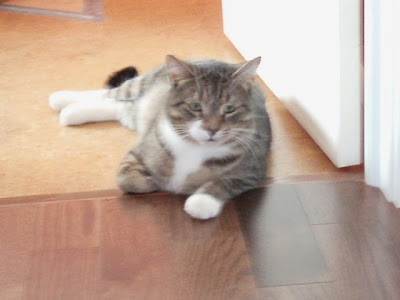