I came home this afternoon at the end of a stressful week, to this..... 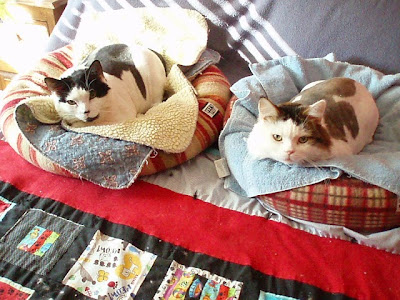 Let me introduce you to our two new foster brothers........the black/white boy is the older of the two (he's 9) and we've renamed him Bumble. His little brother (whose 7) is the adorable munchkin that's already been featured in a previous post - formerly known as Sam we're leaning toward renaming him to Quigley.

Both are sporting lion cuts due to horrendous matting - they both look absolutely adorable in them! Poor Bumble had to have a number of teeth extracted but otherwise they are both in great health and setting in.

Now I ask you, could you leave either of these two precious little faces at a shelter??
Posted by Safe Haven Hotel at 12:13 PM