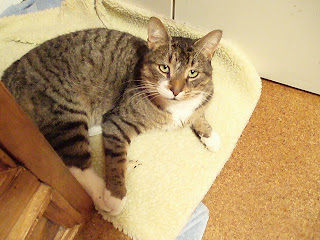 Fisher will have been here two weeks as of this coming Monday. It hasn't been smooth sailing for him or us......

He battled a URI for the first week he was here and although not the worst case we've seen of this dreaded virus, he was totally without an appetite and fought a fever for a couple of days so not fun. We also had an incident in the midst of his sickness (when his fever was at it's worst and we weren't aware), where I was trying to comfort him and he lunged and bit me on the hand pretty severely. It has been extremely painful and has left me abit more nervous about paying him attention, but thankfully my hand did not get infected and Fisher is feeling a 100% better.

This second week has him with full access to the house but he's been very afraid and nervous and has spent a large majority of his time hiding in the livingroom behind the couch. He does come out at mealtimes (smart boy), and his anxiety does appear to be subsiding, but overall he's still battling fears from his time in the outdoors. Something as innocent as rustling a piece of paper can send him scrambling for a place to hide, but he does allow us to pet him even in his secure places, so we're very hopeful.

It saddens us to think of what he went through while outside and it's obvious that he was pretty much terrified. The silver lining now however is that he's safe, warm, and we see alot of glimpses of a very sweet and loving kitty so we realize that time will be a great healer here as it always is.

Posted by Safe Haven Hotel at 5:38 AM