Our new foster arrived yesterday afternoon..........a gorgeous orange/white (creamsicle is how I refer to these kitties) boy, who sadly tips the scales at 22.3 Ibs. 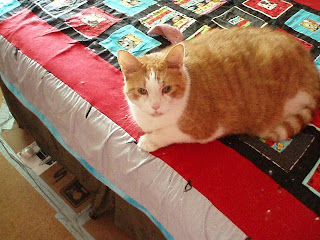 Right now we're having to force feed him since he's suffering from an URI (Upper Respiratory Infection), that has taken away his sense of smell.  He also evidently has sores in his mouth, so we're battling both with antibiotics.

I don't know what makes me angrier, the fact that someone overfed him to the point where he is now obese and can't even jump on the bed because of his weight, or the fact that he was totally neglected, ended up in a kill shelter, got sick, and is now ironically not interested in eating because he feels so lousy.  To top it off, can I just say that I feel absolutely horrible that our first day together has been spent with my washing him (he'd urinated all over himself on the transport here), forcing food down his throat, shoving pills in after that, and not being able to even explain what the heck is going on! 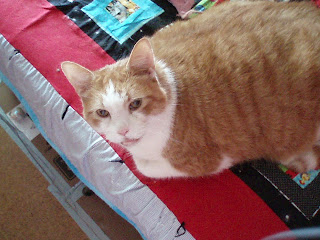 His disposition so far has been that of a little gem, which makes the situation that much more heartbreaking.  He's quietly submitted to everything we've had to do to him, all the while purring.  I've also given him two good brushing's which he just loved!

I'm hoping that he'll be feeling better soon.  Kitties this size that won't eat are in real danger of becoming even sicker, and goodness knows that I'm going to fight tooth and nail to ensure that everything possible is done to help him.

To the person/s who put him this situation, you will answer for it.  To those who have already expressed their disgust at his weight (opinions are alive and well), shame on you for looking down at a defenseless animal and casting judgement.

PS: The shelter gave him the name "Tank" - we will be renaming him very, very soon.
Posted by Safe Haven Hotel at 5:44 AM