I thought everyone might want to see how our Calvin and Clarence or "Two Little C's" are getting along now that it's been a couple of days. Clarence, the larger of the two, and the one brought over from the neighbours house after he wouldn't stop crying incessantly and it was discovered that his brother was just down the road, has been as happy as a little clam ever since we reunited them..........actually, they both have, although its quickly apparent that Calvin although smaller and evidently the runt of the litter, is actually the one with more confidance and provides his brother with reassurance.

Clarence has taken abit more work in the "taming" department, lots of hissing, hiding and scratching going on there, but already after only a few short days, he's improved dramatically and will lay down on hubby's chest now to enjoy some affection. He hasn't purred as of yet, but like they say, "All good things come to those who wait" - so we've no doubt that it won't be long. He actually is quite curious when Calvin is purring up a storm, as if he can't quite figure out what that noise is, but it will be so sweet when we finally hear it.

I'll leave you with the shots we've just taken - to say they are adorable is an understatement.........enjoy. 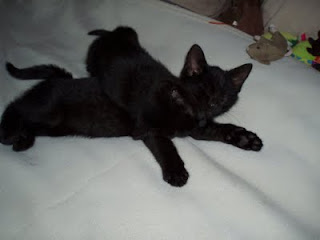 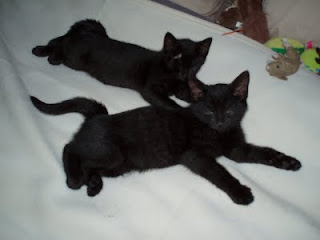