In chatting with a neighbour earlier today, it was discovered that Little "C" had 5 siblings in total - all of whom (with the exception of one), had been adopted out to wonderful, loving homes. There was one that had just been caught afew nights ago much like our Calvin, and who apparently was crying incessantly - obviously the whole "solo" thing just wasn't working for him and he missed his family desperately.

We offered to reunite him with his brother and everyone agreed that them being fostered together was probably the best thing for both of them - and voila! you suddenly have two IDENTICAL brothers in your midst!! 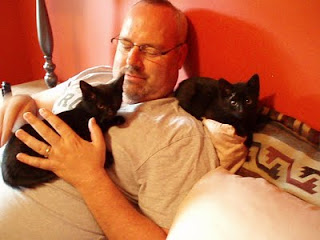 Our new little houseguest is abit more um, can we say feisty than his brother, and abit bigger so evidently Little "C" was the runt, but nevertheless we haven't heard a peep out of either of them since they've been brought back together and they've been having a fantastic time all afternoon, rough housing and playing like all little brothers do. Why I even caught them butting heads over who was getting into the dinner bowl first - typical boys!

The even better news is that some of the neighbours are going to assist with trapping Mommy so that we can have her spayed and vet checked - it's great to have suddenly found ourselves within a cat caring community - it really does make all the difference.
Posted by Safe Haven Hotel at 4:18 PM