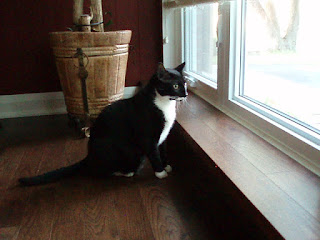 Hogan has officially been here 1 week tomorrow, and yes the picture above is taken from my livingroom. Just as we suspected initially, this devilishly handsome boy wasn't having too much of being sequestered in his guest room - his litterbox habits continue to be perfect so we decided to see how his stress level handled some feline company.

Thankfully our boys have been doing this almost as long as we have so they quickly sense when there is a guest that requires a wide berth and Hogan is just such a guest. I'd say right now that he appears more scared of other cats than hateful of them, and although he hisses and growls when either Rocky or Silly get too close, overall he's doing okay and so are they. Presently his time outside his room is very limited - first thing in the morning until we leave for work, and again when we get home until we go to bed..............and so far it's working for everyone. Hogan actually purrs when I put him back in his room at night and is quiet as a mouse for the duration until alarm clock time the following morning. Already, you can see that he's discovered the front window and is memorized by the squirrels, birds and dogs within his view. He's also already discovered what treat time is and comes readily to be included when those are distributed :))

We still have 1 more week to go before his quarantine is up and he can be placed on the website for adoption, but it's time that will be well spent as we continue to get to know him and further determine if his litterbox issues in his last home were environmental related. He's been very sweet and affectionate with both hubby and I...........he enjoys lap cuddle times, goes nuts for toys, and has a great appetite so if need be, his future forever home may require one without other kitties, but in return he will be one darling of a friend for that lucky someone. 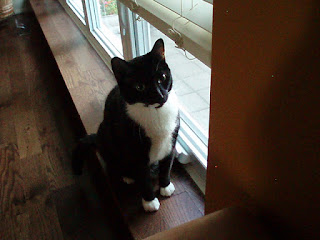