MANY QUESTIONS - ONE REAL ANSWER

We've been working diligently here at Safe Haven to help bring Garfield's issues under control. Yes, you read correctly, that was a plural reference and yes, it's been frustrating and extremely stressful, but I think we've made it up the hill.

Garfield's swollen, red, weepy eyes, were really starting to concern me. I came home from volunteering last Sunday, to discover that in just afew hours the one eye was pretty well swollen almost shut. We had been applying tetracycline ointment in both eyes for over a week with no real results, but it kept nagging at me that his eyes really resembled Flossy's when she had first come to me, and so I decided right there and then that we had nothing to lose if we tried some allergen free food to see if that made any difference.

Well we started the allergen free last Monday, slowly mixing it in. The downside is that it's not weight control, but I think his overall health and happiness is more important, and provided we continue to measure out his feedings (with no free feeds), it won't be that detrimental. The first few days, I held my breath but it became quickly obvious that his eyes were clearing up. As of today, there is a remarkable difference, his eyes are clear, there's no more weeping of any kind, and the swelling near the corners is all but gone. Unfortunately however, the allergen free is causing abit of diahrea at present with the change in diet yet again (this is his 4th food change since arriving), but I'm hopeful that given another week or so, that too will settle down.

The other issues are feline acne (on his chin and the parts of his face where his whiskers connect in), and hairballs! The acne started several weeks ago and continues to evade us even though we've been diligent about washing with a soap. I'm not sure if it's just his being susceptible to it (some cats are more than others) or if it's the stress of living with Rocky. From the research I've done, both can be a factor. The hairballs are a daily issue - he doesn't actual expel them, but coughs regularly. I've been giving him a little hairball remedy at least every other day (he loves it and will eat it right from the tube!), which appears to help, and I'm brushing him regularly as well so hopefully we can keep that under control. 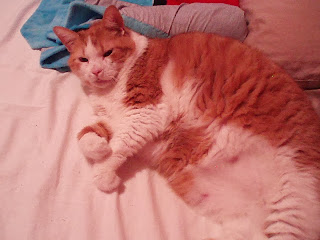 If all of this wasn't enough, we had another visit this time from a very nice lady who was interested in adopting Garfield, and she came out early this morning to meet him...........

As with the majority of the other 7 people who have expressed interest, his weight is a concern. She asked me repeatedly if I could guarantee his health which of course I cannot. I tried to tell her politely but firmly, that I can no more guarantee his health or his length of life, than I could my own or hers for that matter! After about 45 mins, I gently showed her the door. She was a nice person but she's another who is looking for something that she's not going to find, regardless of whether she adopts a skinny cat or a heavy one - anyone can become sick or die at any time; person or animal. Attempts to convey that quickly proved futile, so I bid her adieu with abit of frustration.

Of course I felt at one point as though I was having to defend Garfield as I tried to explain his suspected food allergies, feline acne, hairball issues, and how his current weight is not his fault!!!!

That too made me feel uncomfortable and somewhat resentful. I finished by telling her that I want the person/s who adopts our boy to love him for just the way he is, not with the idea that they are going to be able to change him into a skinny cat (which of course is a healthier thought but not very realistic I'm afraid).

PS: To the individuals who have told me repeatedly how stupid it was of us to rescue a 22Ib cat from certain euthanasia - you can go jump in the lake!!!!!!!!!