Today I feel a little bit like an investigator. Not sure of what I have, uncertain about the facts versus assumptions, and mystified about how to best to approach the situation.

Garfield has gone in the last week or so from spending a great deal of time downstairs with us when we're home, to staying upstairs and unless I'm up there watching television, being by himself. His appetite, water intake and litterbox habits all remain normal but I sense a shift in his mood, and it's concerning me. Three times this week, I've caught Rocky, jumping on Garfield's back and biting his neck - dominance aggression I know, but Garfield will not fight back and Rocky knows it. Garfield outweighs Rocky by as much as 10-12 Ibs easy, yet it just goes to show how the alpha aspect works.......because Rocky is the Boss in this house; even a cat twice his size won't take him on.

I suspect that that is why Garfield has become a little more reclusive and preferring to stay on the 2nd floor. He's also gone from lounging on the landing to preferring the old beat up chair in our home office or the bed in our spare bedroom - again, both places that Rocky won't frequent as much. In addition to the change in his behaviour, I've also noted that afew sores which were present on his gumline when he was first taken to animal control, and the puffiness/redness around the bottom lids of his eyes, that was also present upon initial examination, seemed to have both flared up again.

We took him to the vet afew weeks ago regarding the eyes but the visit was a total disaster. He became very aggressive and violent once he was let out of the carrier at the vets, it took 4 people to hold him down, the vet was afraid to properly examine him, and in the end, he bit Steve as they were trying to get him back into the carrier to come home. Soooooo, another vet visit is not the preferred route to go and Steve has actually indicated that he's not willing to take him back. The stress on both him and Garfield was enough that at this point anyway - so I may have to find another avenue to have this addressed; perhaps a vet who does home visits?.

I'm only taking guesses at this point but I wonder strongly if the swollen eyes and sores are stress related?

This is the harder part of fostering; when you wish the cat could actually talk and tell you what was wrong and how they really felt. Every foster parent wants their houseguest to be happy and enjoy the time in their home - thinking that Garfield may be unhappy here to the point where he's exhibiting physical symptoms of that is a worry for sure. 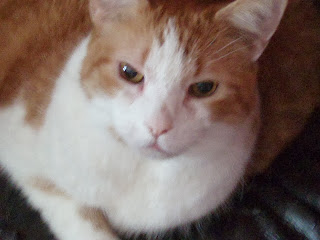 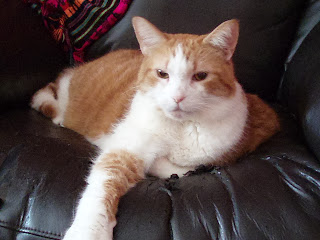