The Summer has been very quiet adoption wise - moreso than I realized until I did a calculation and determined that Hobbs & Abner have been the remaining two kittens staying with us alot longer than I ever dreamed they would.

They grow more cute and adorable by the day (if that's even possible).  Abner is the more serious of the two, the quiet older brother we like to call him.  He's already settling into a mature kitty even at 5 months of age - you can see the differences between him and Hobbs now personality wise, alot more distinctly.  Abner is also alot shyer when it comes to camera time.................Hobbs is a little magnet for the flash but his brother prefers to stay in the background; thus very few pictures of him as of late.

Hopefully we can change that soon but until then, I wanted to share this latest photo of Mr. Adorable Himself.............sweet Hobbs.  If you're looking closely and wondering what that little "tip" is you see sticking out from under his belly; well it's the tip of his tail!!!  When I came upon him like this I just had to snap a shot since it was too cute how he had it tucked all the way up there. 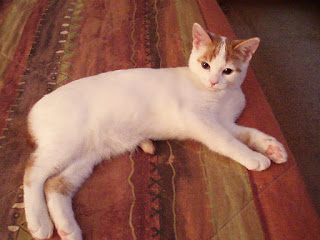