It's been very quiet fostering wise the last little while. In all, we've now had 3 calls of enquiry on Flossy but the last two, upon learning that she has had a full mouth extraction and that she has to eat hypo allergenic food that is $65 a case, were immediately no longer interested.

The expense of the food I can understand, some people don't want to take that on up front due to their own restricted budget, but the concerns over her full mouth extraction (actually she does still have her front canines or fangs), baffles me. Why people are so leery when they learn she has no teeth is really beyond me..............I mean, she's the one with no teeth so what are they so worried about!? She eats like a little horse and she would/does eat whatever you put in front of her, hard, soft or otherwise! As always it appears that alot of people are looking for that "perfect" cat, the one that has no health issues, no emotional or psychological issues, no temperment issues, no faults and certainly no real dislikes! Little do these same people realize that they themselves come with varying degrees of all those things themselves, so why they expect an animal (who in many instances has been abused or abandoned) to be void of them; well, it's a rant for another post I guess. :))

One of little Flossy's favourte spots now is at our front livingroom window, where she spends oodles of time enjoying the comings and goings of the world laid out before her - cars, people, dogs, other cats and of course the multitude of birds and squirrels that grace our front lawn and the trees therabouts. The title of this post refers to this place as an observation deck, because that's just what it is for her, her own big screen view of the outside world she's happy to observe but has no interest in returning to. 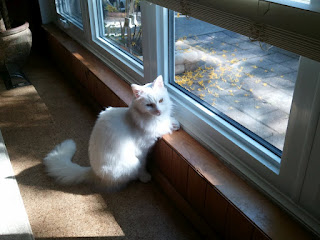 Posted by Safe Haven Hotel at 7:40 AM