Like with all adopters, I checked in with Clarence' new Dad the day after he took him home last Sunday to ensure everything was going smoothly so far. He sent lovely photos of Clarence lounging around his new home, not nervous or afraid, and seemingly loving life as an only pet. He had already been up on his new Dad's lap for a nap and everything seemed blissful - seemed being the operative word.

When Clarence arrived here at Safe Haven initially it was discovered that he liked to "jazz" the blankets or your feet if they happen to be under the blankets - another term commonly referred to as "humping". The behavior was discouraged from the outset and over the 8 weeks that he was here, it had certainly lessened in frequency. When the adoption inquiry came, we were completely upfront with "R" that Clarence did do this, and emphasized that he would want to discourage it as well. Turns out, that he wasn't as firm with Clarence as he should have been, and found himself being woken several times during the night by Clarence doing this on his bed. We suggested he had to be more firm and if that didn't work, than to place Clarence outside the bedroom for the night - he wrote back in a subsequent follow up email afew days later, that it worked the first night, but he abandoned it after that since he couldn't stand to listen to Clarence crying on the other side of the door. There was also the fact that Clarence was getting up on the kitchen counter when he wasn't home; although we gave him afew different ideas on how to curb this as well, he wrote to tell us that it was really grossing him out. The final straw came when I wrote last night to see how things were going, only to have him tell me that Clarence liked being "underfoot" (his word not ours), too much and it stressed him out when he was trying to cook in the kitchen. Needless to say, I instructed him to bring Clarence back to us immediately................ 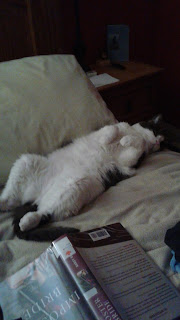 So my reading partner has returned. Looking very confused as to why he's back here instead of in his new home which he was thoroughly enjoying having to himself, both of us being very disappointed and feeling very guilty that we put him through the move, and our own boys looking somewhat perplexed as if to say "Really, Mom & Dad"?

Clearly this adopter loves the notion of having a cat but no tolerance for actually having one. Our hearts are heavy tonight that this darling sweetheart once again finds himself without a home of his home. Hopefully there is someone out there who will really want to love him forever - because he's waited far too long.
Posted by Safe Haven Hotel at 3:52 PM