To date we've had 6 adoption inquiries for Muff but as of right this minute, none of them have been the right fit. The first person to meet him had a senior kitty at home (16 to be exact) and although she seemed nice enough, her referring to Muff as "rickety" (and that's a direct quote), kind of turned me right off. So I gave her the "out" which is basically where I give them a gentle nudge in the backing up direction, and she took it hook, line and sinker.

The second interested party was a woman that had two small children. I'll be honest in saying that I was very skeptical before I even spoke to her; two small kids with a senior kitty - not on my watch I said to myself. But I was humbled right away after that big declaration because upon speaking to her, she was the LOVELIEST person and it was quickly evident that not only would her home be an awesome one for any kitty lucky enough to land there, her wee ones sounded equally as awesome and I don't doubt that they would be wonderful friends to a feline companion! We mutually agreed however that Muff might be just abit too senior for her family............

The current interested party has no other pets and lives alone. May work out, however, I just got an email earlier and by the sounds of it, she's in no hurry to come and meet our cream colored King because she's asking about a meet n' greet appointment for "next week sometime" - hmmmmmmmmmm.

Aside from the flurry of activity since his adoption posting went up, here back at the ranch Muff himself is doing fabulous. He's settled in so well now and has started wanting to have a cuddle with me in bed at night before my light goes out. Of course at 20 Ibs, I have to help him onto the bed but the real trick is that Rocky has to be up on the bed first and wants the primo spot before he'll even consider letting Muff infringe on his territory! 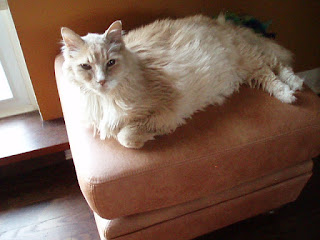