In addition to fostering for the rescue, I also volunteer as a Post Adoption Counsellor. In this capacity, I work with people that have adopted from the rescue and are reaching out because they are having issues with the kitty/ies - whether those be behavioral, medical, or surrendering in nature. Yesterday, I received a case that involved a woman who has recently been diagnosed with pancreatic cancer and needed to surrender her adopted kitty back to us as a result.

What started out as a bright, upbeat day, quickly turned dark and sad for me. To say that I had to take many deep breaths before making that call would be an understatement. I did so only after I prayed that I would be able to keep my emotions in check as I spoke to "D". As we chatted, and I gathered the information I required in order to begin the process of a return, I couldn't help but feel this woman and her cat sounded eerily familiar to me. Long story short, it turned out that the reason they sounded so familiar was because they were................her cat Muffy (who we knew as Simba), was one she had adopted from us as we had been fostering him when she came to adopt him back in 2009.

I've said it before, and I'll say it again. I believe wholeheartedly that everything happens for a reason, and I also do not believe in coincidences. The fact that our foster space has been empty since the end of January was something that I believed the Lord made happen so that we could spend precious time with our Rocky, but I also now believe that He did so because He knew that D and Muffy (who is now 11 years of age), would need us. Upon arriving at "D"s earlier this afternoon, she had gathered all of Muffy's things together and we helped her get him into the carrier. He didn't fight, almost as if they had had a long conversation and he knew that this was how it had to be.

Tonight he is quiet, sad, and clearly missing his Mom and his home. I don't know what is worse, when we welcome them in not knowing the road they've travelled or circumstances such as these where I can look into their eyes and see the longing for home and know that they can never go back there. We reassured "D" that we would take very good care of him and that we'd ensure he was adopted out to a very good home. Despite those promises, I can well imagine that she misses her friend tonight as much as he misses her.

And for me, that is truly heartbreaking.... 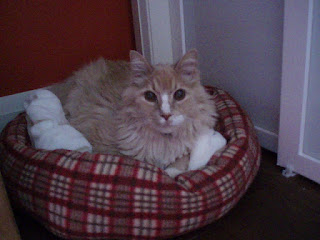