At present we're still without a foster. Normally, I'd be very anxious since it's been just over six weeks or so since we moved Oreo but for present, we're okay with the situation the way it is.

We had our Rocky back to the vet a week or so ago due to some health things that had arisen in the last little while which we've been concerned about. Our vet strongly suspects that based on symptoms, it's very likely that our little boy has cancer growing somewhere either in behind his one eye or in his nasal passage. His vision in the one eye is very minimal now (more like looking through frosted glass according to the vet), and that coupled with alot of wheezing, sneezing and raspy breathing, has led to this latest diagnosis. The good news is that despite being quite thin now, he's held his weight since October and his appetite is still fantastic. He's much, much quieter these days, preferring to sleep away a large portion of the hours, but overall still comes for treats, still likes to snuggle, and is still letting us know when he wants wet! :)

We're all in agreement that while his appetite is good and his seizures are in check, we'll keep him comfortable and enjoy every last second together. Time wise, it could be anywhere from 3-6 months but of course, leaving this world is never on our timetable so noone really knows when it will be time for him to cross over the bridge. Having been here before, we know that Rocky and Heavenly Father will let us know when it's time...............until then, we're thankful. 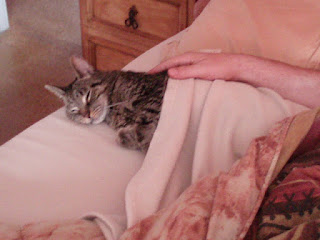 Posted by Safe Haven Hotel at 8:32 AM