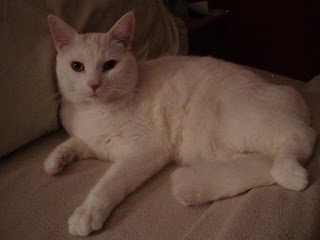 Mako is still our current houseguest. Somewhat surprisingly, there hasn't been one adoption call for him as of yet. We suspect that it may due to the fact that we've disclosed he has a slight heart murmur. He doesn't appear to be suffering in any way shape or form from it, nor does it hamper his ability to play or enjoy daily life. Our Miss Remy had a heart murmur and she lived to be 16 so we don't feel it would be a deal breaker for us in any way shape or form; but it's likely causing others to pause.

He is so beautiful and SUCH a lovebug! Quite fearful of loud noises and sudden movements, he startles easily but he also is becoming less nervous all the time and doesn't hide hardly at all anymore. He loves to be brushed, to snack on Temptations treats, and to snuggle under covers. Sometimes we come upstairs unable to find him, only to realize that he's under our duvet on the bed or has burrowed under my housecoat. He's also found peace with our two boys - although I would like to see him go to a home as the only kitty (because I think he would be less nervous there), he could also find coexistence with another feline, but it would have to be one that is VERY laid back and non threatening. He grew to like Ivey quite quickly so a female could be a better choice than another male.