In recent weeks I had seen a little kitty once again roaming our neighbourhood, but had yet to get an up close introduction. I kept hoping that it was just someone's kitty that had decided to go on a little neighbourhood walk, and that it wouldn't end up being another stray yet again appearing. Well in the last week two of our neighbours had made us aware of this little kitty, and befoe I had a chance to obtain a trap, I got a call last night indicating that he/she had quite happily (and easily), been coaxed into my one neighbours home where she spent the night.

We picked her up after work from the clinic, all freshly vaccinated, dewormed and deflea'd, and thankfully, she was already spayed (a first for us) - at least someone cared enough to do that! Sooooo we're fostering another until there's an adoption and she can be moved. In the meantime, she is SUPER CUTE, SUPER SWEET, and SUPER AFFECTIONATE, and we've named her Carmel. 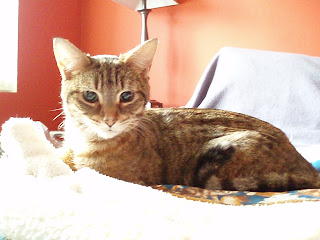