Who says that big boys don't enjoy the same thing as their slimmer counterparts? Proof is in the pudding I say, and here's a perfect example: Farley enjoying a standard sized kitty bed - all 20+ pounds of him! 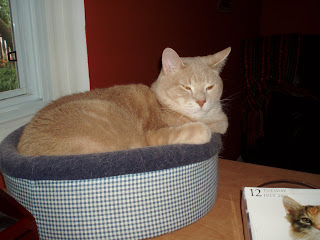 Yes, this gorgeous boy is still waiting for his forever home - it's been over 4 months now and 2 months since anyone was even here to see him. We can only conclude that it's potential adopters hearing about his size when enquiring that seems to be putting them off. I so wish it wouldn't, he is such an incredible boy inside and out and people are really missing out just by excluding him because he's abit bigger than most other kitties.

It reminds me of people - those that ridicule, make fun of, or even ignore those that are overweight. It's just downright mean and so shallow - to express that toward an animal is even worse in my opinion, it's not as if he reaches up and opens the cupboard door himself, that got him to where he is currently on the scales - to say he had alot of help would be putting it mildly!!

Well as you can see, he's loving his time at Safe Haven and until that right person/s comes along who can love ALL of him without reservation or prejudice, he's more than welcome to continue to be our guest.