When we welcomed Beaumont into our home several weeks ago, he had been located by a feral feeder from the rescue as a stray that she came upon and had been feeding for a number of weeks prior to his being rescued. Lost and found posters went up for him just prior to him joining us here at Safe Haven and we could tell immediately from the beautiful condition of his coat and his super friendly nature, that he hadn't been homeless long.

Fast forward to this past Wednesday when we got a call from the feral feeder that had originally rescued him, that she had received a call from someone that day indicating that they thought Beaumont was their lost cat. I have to say that in rescue there are instances where people looking for a beloved pet who has been lost will reach out to us, but rarely do those calls ever result in reuniting pets with owners because 9 times out of 10, it doesn't turn out to be their pet after all.

After a initial discussion with this owner (where she provided abit of information that led us to believe that Beaumont may very well be hers), we arranged for her to come by and meet him so we could all know for sure. The long and short of it is that he is hers and apparently escaped his home after she had become ill and was hospitalized. Beaumont was pretty stressed when she came as there were a number of people in the house and he doesn't do well with alot of commotion, but picture comparison as well as her describing some of his quirky habits, all confirmed that he was indeed hers.

There is another part to this whole situation in that the rescue has not only paid for vaccinations, defleaing and deworming for Beaumont but he also had to have some dental work done so there are vet expenses that will have to be recouped from the owner prior to reuniting them permanently. This aspect hasn't really gone over very well with the owner but as explained to her, the costs are at a huge discount AND we are not running a vetting service. It's been extremely stressful dealing with all of this, and of course now that we know Beaumont has a home, this has turned into feeling more like a cat sitting situation than real rescue of this darling boy.

This will have to be resolved this coming week as we have another homeless boy (who is truly homeless this time), who is in need of saving and we need to get back to the business of proper rescue. Still, there's mixed feelings on our part over how things have unfolded - we're just trying to remember that everything happens for a reason and we helped Beaumont when he needed it. 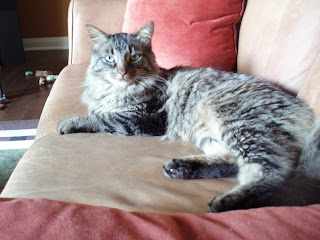