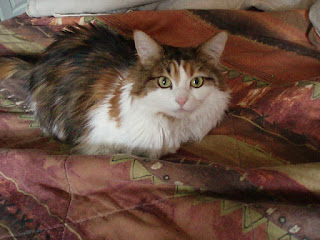 Life at Safe Haven couldn't be more volatile if we tried. To put it simply, Karma HATES the boys and the boys HATE Karma. It didn't take us long to figure out that the vicious cycle were caught up in has Karma totally picking on Rocky, and then Silly totally picking on Karma. Since the latter is so out of character for our Silly, we can only determine that he's chasing/stalking and pouncing on her because of the way she's treating Rocky. It's okay for him to beat up on his little brother, but nobody else dare.

I also think that after about 5 fosters in a row or so now that have all been females (and all the glorious truths that come with that), the boys are basically saying ENOUGH! - no more bossy, princess, stuck up types. Rocky & Silly have really overall been good as gold when it comes to their home having been turned into a revolving door of strange fellow feline guests, but with their advancing age (Rock is 13 now and Silly is 11 by best guesses), and thus their lack of as many patience as they may or may not have had before; I think they are both giving the sign that strange cats okay, strange FEMALE cats - forget it!

It seems we've all heard them loud and clear as there was an adoption call for Karma as of this morning. Of course we have yet to determine if this is the right fit, but we're all hoping (some more than others), that that is just what it is.