SNEAKY TACTICS IN THE DARK!

After 4 months of being with us, the proof is in the pudding (or so they say). It's pretty clear at this point that our Rascal is not a lap cat. I thought we were making real progress when in the past 4 weeks or so, he actually jumped up on my lap when I had been loving him on the floor, and got up to sit in a chair because my creaky old bones were screaming help from that position! *L* - but infact I think it was just him having forgotten himself for a moment and once he realized where he was and what he had done, he was down just as quickly as he'd gotten up.

It's also pretty clear that he hates to be picked up. It's not the actual act of picking him up that our little licorice coloured boy seems to detest, but the actual snuggle part when he realizes that you want to cuddle him up there. He begins to squirm almost instantly and within a minute he's letting out these painful little meows, that would have anyone listening thinking I was doing some type of bodily harm to him.

But in spite of his aversions to these two things, he absolutely loves to snuggle up and cuddle. Usually at night and usually after we've gone to bed. For whatever reason, his favourite spot is smack dab in the middle of my husband's legs, and without either of us hearing him, he strolls in, hops up, and before we know it - voila!, he's curled up like a little ball of dough. There's only one problem with this whole scenario - whilst Rascal may be having the nightime naps of his life, he is slowly crippling hubby with his demands for snoozing space between the legs. No matter how many times in the night hubby might awaken and move Rascal out of that space, by morning, he's right back there and slips away just as the alarm goes off.

Every morning for the past 4-6 weeks now "Daddy" has been bitterly complaining of how much his back is hurting and it's all thanks to our little houseguest who, despite there being a zillion places to snooze throughout the house, including two pillows above our heads, NONE it would seem, are more comfortable, more alluring or more tantalizing than right between Daddy's legs! 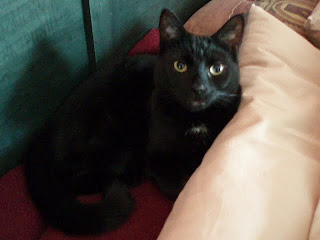 Initially I was abit worried about my husband's back but that has now gone all the way from concern to humorous, to cringing when I hear him moaning and starting to complain about that "little black bugger" (his words not mine), back to trying to contain my snickers of amusement. It's made all the more difficult when I find Rascal smiling up at me from the floor in the morning's, and I could swear I see a glint in his eye and the infamous yawn of contentment almost as if he's saying.......... "Oh Mommy, how I love it here!"

Let's hope "the back" holds out until his forever home shows up or we could all be looking for new accomodations! *L*
Posted by Safe Haven Hotel at 4:37 PM