When I'm home on weekends, I love my cheerios. I don't eat them during the week, but come Saturday morning I actually find myself, as I make my way down to the kitchen, really looking forward to finding the box and silently praying that we (A: have milk and B: that it isn't expired).

The boys also love weekend mornings because as soon as they see my bowl and hear the clatter of the spoon, they know it's "milk" time. Although I'm well aware of the unhealthy aspects of milk and cats, it's become abit of a tradition if you will, that the boys each get afew licks to wet their palette each Saturday and Sunday morning after Mommy's had her share. This past weekend was no different - Silly always gets to go first because he's practically on top of me as I try to eat each spoonful, it's so bad that I have to hold my bowl up practically over my head while he balances his two front paws on my one knee and takes more than the occasional swipe at my bowl! It's so adorable to hear how he purrs as he laps it up - (I always think to myself that he must have been one of the world's cutest kittens). Rascal is a close second, although he doesn't get so aggressive (preferring to wait patiently right beside Silly for his turn), he's learning quickly from his housemates, and is now letting out those meows that would make you want to give him anything he wants (their such con artists!!!). Rocky, well Rocky being his typical finicky self, sits back with the saddest look on his face, always last to join in because of his jealousy, he prefers to pout for abit first, ensuring that you really go the distance to coax him over for some.

Normally, no one boy gets too much - I'm careful to monitor and take it back up and to the sink before it's completely finished by anybody; well, usually. This past Sunday morning, we had had our little routine, but truth be told, Rascal had had a little more than "the usual" due to the fact that I got distracted by something and left him alone with the bowl a wee bit too long.

Next thing I know I hear the worst sounds and it's our Rascal - being sick, and you guessed it, it was all milk. Unfortunately it wasn't just once episode, but about five, all strewn throughout the downstairs of the house. As I dashed back and forth between the kitchen and the livngroom/diningroom for more paper towel, all the while trying to ensure I kept him in my line of sight so there weren't accidents in places I didn't know about, I began to see visions of my husband (who was out of the house early that morning and wouldn't be back until later that night). "Daddy" is an amazing Father to the boys and loves them so much, sometimes it brings tears to my eyes to watch him interact with them, but the one thing that he is a total weak knee'd pansy about is cat vomit. I always thought it was an act (you know how men love to get out of things), until one evening Rocky presented us with a very large hairball that was tossed up right after dinner (are you getting the visual here?) - well I was in the middle of multi tasking and asked hubby to take care of it.
I come back into the room to find Daddy practically green, sweating profusely holding out the paper towel with the kitty sickness in it, pushing it toward me, like I'm supposed to rescue him from a fate worse than death! It was after that that he explains he'll do anything, but (and I'm quoting), "Please don't make me clean up cat vomit"

So as I followed along behind Rascal the other morning as he tossed his cookies, I could't help but begin to snicker as I thought about moi husband, and what his reaction would be to this latest Kitty Parent episode..............I think the picture below is a more than adequate depiction!!

PS: And no I'm not married to Popeye the Sailorman :) 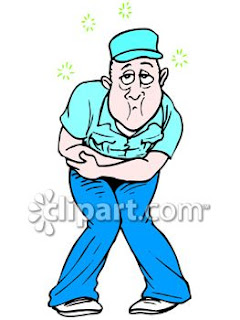