BLACK & WHITE IS THE NEW IN! 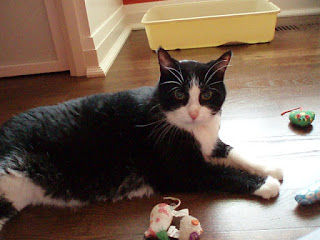 This is Oreo whom we just picked up about an hour ago from the shelter where he's been miserably existing for the past two months. His owner died at the end of August and the family didn't want him. I'm not sure how you leave a 12 year old cat at the shelter that your Mom loved, but like alot of things in life..........it happens all the time.

Shelter staff reported him grumpy, hard to handle, not eating well, and it remained unseen whether he would tolerate other cats so that description didn't exactly endear him to us when the rescue reached out earlier in the week about us considering him. But then I started to think about my sister who left behind her two cats when she died, and my brother who died this past Summer and left behind his cat - in both instances, noone else wanting them - at least not initially. And then that still small voice planted that seed of reassurance like it often does, and we took the chance, letting the rescue know we wouuld welcome this old boy here at Safe Haven.

So Oreo's been here an hour, has already eaten, hasn't stopped purring, and has already posed for these two shots. Oh and as it turns out, he does tolerate other cats as he was initially surrendered with a brother (sadly we're not quite certain what's happened to him). 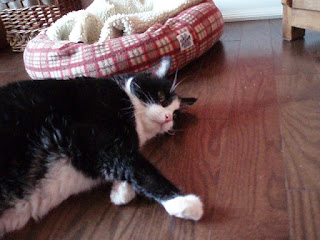