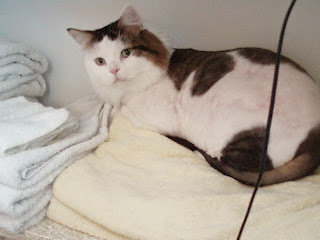 It's been about a month now into our fostering of Bumble & Ziggy. We've had afew hurdles to clear with things like, abit of overgrooming on Bumble's part from stress, Ziggy's stinkerbum attitude toward our boys that is really rough play and no manners on how to interact with other cats, and some diet modifications to help with bathroom function (need I say more?), but this week things have been better on all fronts - thank goodness.

Bumble is painfully shy, he's only just started to venture off the 2nd floor of the house this week and still growls at everyone (including his own brother), if they get too close. It would appear that he's either very crochety or has been horribly mistreated; the only thing that makes us doubt the latter is how outgoing and friendly Ziggy is and they came from the same home. I guess it's always possible that Bumble was the one that got ignored and abused but although I know parents can have favourites where human children are concerned, I'd hate to think that that extends into the animal world as well; especially to this degree. 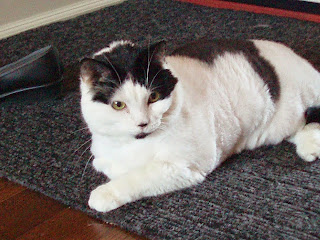 No matter what's going on, the boys always end up sleeping side by side in their respective pet beds during the night which is just so adorable to see. Ziggy surely loves his big brother, and although he appears to also get on his big brother's nerves at times; I think that that's just what siblings are for. :))