Firstly, I want to thank everyone for their words of encouragement and suggestions on ways to help Flossy as a result of my last post. It's very heartwarming to know that I'm not just typing to dead air, and that there are people out there who are reading, and who care - thank you again.

We're delighted to report that Flossy is doing amazingly well since I last typed only afew short days ago. She's eating on average about 4 cans of Fancy Feast (the small ones) a day, and is not dehydrated! Her URI is almost completely cleared up with just the odd sneeze now and again and a very small amount of discharge from her eyes, and the gagging and choking that I described prevously also seems to be diminishing and becoming less frequent. It's her behaviour that is most noteworthy though - she has begun to travel between her room, and our home office on the 2nd floor, and once we go to bed, she goes exploring the whole house! We know because in the morning we find tuffs of white fur everywhere like a little trail of cotton balls, and often when I awake first thing, she's not in her room but usually downstairs in the diningroom on one of the chairs.
She also appears much brighter, is carrying her plumie (gorgeous tail), high with abit of a bend at the very tip which I like to call the "candycane" walk, AND she has also begun coming to us for rubbing and pets when we call to her! Last night when I opened her food for dinner, I went to head upstairs to give it to her, only to find that she'd venture all the way to the threshold of the kitchen and had this expression on her face as if to say "That had better be the good stuff Mommy"!!!!!

The added bonus is that she doesn't mind the company of other cats AT ALL!!!!! She meets Rocky's growls and hisses with total indifference - hubby and I joke that her facial expression when Rocky begans posturing is one of pure disgust (typical female!).

Below is tonight's picture - she looks a million times better and I hope you can see that diva glint in her eye. As I type this, she's curled up just beside my feet under the desk............... 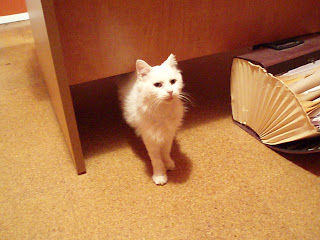